If before marriage Zaid takes an oath that after
marriage if he utters any word it will count as a divorce, will his wife be divorced if utters any word according to Shaf’i fiqh?

The Messenger of Allah (peace & blessings be upon him) said, “There is no divorce prior to marriage” [ibn Majah and others]. Accordingly, Shaf’i scholars amongst other schools of fiqh, held that divorce would not be valid in the instance where a man, prior to marriage pronounces that any lady that he marries, is divorced. Similarly, they opined, that the divorce will not be valid when he addresses a specific lady saying to her, “If I marry you, you are divorced”. [Iqna’]

Explaining the reasoning behind the non-occurrence of these divorces, Imam al-Shafi’i said, “because the utterance that holds the ruling (of divorce) emenated from one that did not own (the right) of divorce.” [Kitab al-Umm]

Accordingly, the divorce of Zayd in the question above will not occur if he was to marry and then utter words. This is so, because he pronounced a divorce while he was not entitled to issue one.

How Can a Woman Get an Islamic Divorce? 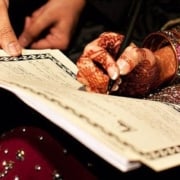 Can a Man Say to His Wife: "If I Commit Adultery Ever Again I Will Be Divorced…