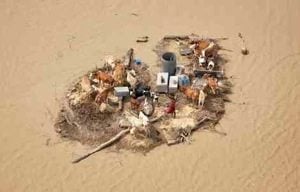 Dying due to a natural disaster, such as an earthquake or flood, is a form of martyrdom.

The scholars have mentioned that martyrdom (shahada) can be of three types:

1. The one who is considered a martyr in this world and the next,

2. The one who is considered a martyr in this world but does not attain its full reward in the next, and

3. The one who is considered a martyr only in the next world, meaning he or she will get the reward a martyr gets.

Dying due to a natural disaster falls into the third category. As such, unlike the first two categories, such an individual will be washed and shrouded in a normal manner. [Nawawi, Sharh Sahih Muslim; Taqi Usmani, Darse Tirmidhi]

Other narrations add to the list individuals who die of burns, woman who die while pregnant, and so forth. [Muwatta, Musnad Ahmad]

Imam Suyuti has a complete treatise on the issue citing many of the narrations that mention who is considered a martyr titled Abwab al-Sa`aadat fi Asbab al-Shahada. The categories are many, and so we pray that Allah make us amongst them.