Question: About 10 years ago i tried to convert to Islam because I felt there was a lot of evidence for it being true. Unfortunately I ended up being overcome by doubts. I was trying to quit heroin at the time so that may have had something to do with it.

Since then I have lost hope. I was afraid that I would go to hell forever so I wanted to forget all I learned about Islam. I tried Buddhism and a quasi satanic like religion called Thelema, and then I gave up even that to be completely atheist and nihilist.

For a while I felt satisfied that there was no god and nothing to really believe. About a month ago my nephew converted to Islam. It was quite a surprise, he was breaking the law and getting in trouble and he impressed my by changing completely. I haven’t been able to stop thinking about Islam and I started to try to give it another chance in my mind and heart. Now I no longer want to be atheist. I want to Believe. I don’t want to go to hell.

I have reviewed what I have learned about Islam and there seem to be so many proofs of its being true . And Muhammad seems to be exactly what he claimed to be. I feel I could trust Muhammad and that the Qur’an is the word Of God. But the problem is I always have doubts that won’t completely go away. I am willing to accept all the tenets of Islam even though I have doubts.
If I say the shahada will I be guilty of hypocrisy? Please help I feel like i am stuck in limbo and i know it is mostly my fault.

No, you will not be guilty of hypocrisy by saying the testimony of faith (shahada). Repentance wipes out sin and its traces. See:

“The one who repents from sin is like the one who never sinned,” said the Holy Prophet (Allah bless him and give him peace).

Say the shahada, and rejoice in God who has destined you to be from those ultimately in Paradise forever. Be of those of glad tidings. And ignore satanic misgivings. The devil is your sworn enemy. All he wants to do is to confuse you, fill you with doubts, and then make you leave the Straight Path so that you end up following him into Hell. Rather, follow the Muhammadan way. How? Find local scholars, gatherings of knowledge and remembrance, and seek knowledge. Strive to inwardly and outwardly uphold the Prophetic character seeking Allah therein. And if you have any questions, ask.

Read the following two articles: Doubts About Islam: I Don’t Find Any Observable Effect or Peace in My Worship and: How Can I Regain My Faith After Doubts and Exploring Other Religions? 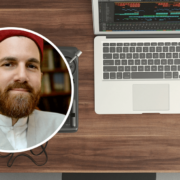 Why Do So Many Muslims Struggle With Stopping Sexual Sins? My Inability to Escape My Desires Fills Me With Despair - Is There Any Hope for Me?

Worshipping in a Room One Commits a Sin In?