Shaykh Gibril Haddad gives a full and rounded answer to the question of the martyrdom of our master, Uways al Qarni, including biographical sources.

1. Was our master Uways al Qarni, Allah be pleased with him, martyred in the Battle of Siffin while fighting on the side of our master Ali, Allah ennoble his face?

2. Could you relate a few narrations about Uways al Qarni, Allah be pleased with him, giving a general overview of his life?

The answer to your first question is yes, and when he was found they counted more than forty cuts on his body as narrated by Ibn ‘Asakir in Tarikh Dimashq (9:438).

Historically his grave was well-known and visited in Raqqa province, to which Siffin belonged. But I am not sure whether it still exists or was destroyed by the supposed upholders of Islamic civilization and statehood.

The most comprehensive source on the biography of our liegelord Uways al Qarni, Allah be pleased with him, is in Ibn ‘Asakir’s Tarikh Dimashq (9:208-455). There is also an interesting entry on him in Ibn Hajar’s Al Isaba fi Tamyiz al Sahaba and an all-too-brief monograph on him by Mulla ‘Ali al Qari entitled Al Ma‘dan al ‘Adani fi Fadl Uways al Qarni.

All but the last of the above sources also mention the alternative account of his death subsequent to an illness on the return of a trip to Azerbaijan with our master Umar ibn al Khattab, Allah be pleased with him. However, the Hafiz Ibn Hajar said its chain contained a discarded narrator.

On our master Uways, you can find something here in English. However I will cite something below which you might not find anywhere else.

Al Khallal narrated in his book Al Hathth ‘ala al Tijara wa al Sina‘a (The Encouragement to Trade and Industry):

I [Abu Bakr al Marrudhi] told Abu ‘Abd Allah [Imam Ahmad ibn Hanbal] of a man who quit buying and selling and swore to himself that no gold or silver would ever fall into his hand again. He left his big house without giving any instructions regarding it. He would go on the road and if he saw anything discarded he would take it from the trash. I [al Marrudhi] said to that man: “What is your proof for this? I do not think you have any proof for it other than Abu Mu‘awiya al Aswad [one of the Abdal].” The man said: “Yes, I do. Uways al Qarni! He would pass by garbage heaps (mazabil) and collect rags.”

He [Ahmad] confirmed his words and said: “He is definitely too strict on himself!” (qad shaddada `ala nafsih). Then he said: “Two poor souls once came to me asking me something very similar to this. One of them said he goes on the road and finds something like vegetables and such. I told them: ‘Why not find work? Do you want to be notorious?‘ They only replied: ‘And what do we care about notoriety?’”

Al Khallal also narrated with his chain that a man asked Uways al Qarni: “From where will livelihood come?” Uways said: “Tell him: Truly we declare and do swear that those hearts, when they start doubting, no admonishment will benefit them!”

May Allah have mercy on him and grant us his intercession on the Day of Mutual Cries. 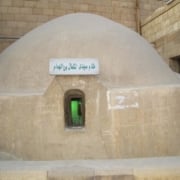 The Trodden Path: A Glimpse At the Lives of the Illustrious Scholars and Saints of the 20th…

The Trodden Path (Episode 6): A Glimpse At the Lives of the Illustrious Scholars and Saints of…

The Trodden Path (Episode 4): A Glimpse At the Lives of the Illustrious Scholars and Saints of…