Question: Zubair ibn Abdul Mutalib, the uncle of the Prophet (saw), was known as a monotheist in pre-Islamic times. I just wanted to know whether he passed away before Islam or if he was alive and did he accept Islam?

Answer: As-salamu Alaikum, and Jazakum Allahu Khairan for your question!

You raise an intriguing topic, since not much is known about the Prophet (pbuh)’s uncle, Zubair ibn Abd al-Muttalib.  In fact, many of the sources of the tradition (seerah, hadith, and biographical literature) have very little to say about this important figure of the Pre-Islamic jahiliyya period.  This is because he was one of many uncles of the Prophet (pbuh), and because he didn’t seem to play as major a role in the Prophet’s life as some of his brothers, such as Abu Talib, Abu Lahab, Abbas, and Hamza.  However, what the scholars did mention is enough to give us a brief understanding of who he was and what he did.

One of the elder sons of Abd al-Muttalib (the Prophet’s grandfather), Zubair served as one of the leaders of Bani Hashim.  He led his clan in the Fijar (Sacrilege) War, so named because fighting during the war continued during the sacred months.  He also participated in the Hilf al-Fudul (Alliance of Virtue), wherein the leaders of Mecca agreed to establish in their territory principles of justice that transcended tribal allegiances.  Of this pact, the Prophet (pbuh) would later say that if he could, he would have joined it as well, indicating that it was consistent with the principles of Islam.  In addition to his noble character, Zubair was known for his poetry, and several of his poems have been preserved to this day.

As for Zubair’s association with the Prophet (pbuh), very few incidences of interaction are explicitly mentioned, aside from a trip they took to Yemen together.  We do know, however, that the Prophet (pbuh) was alive for much of Zubair’s life, so the two probably knew each other very well.  This raises an important question: if Zubair was older than Abu Talib and was alive throughout the Prophet’s youth, why did Abu Talib, and not him, take custody of the Prophet (pbuh)?

In his work on the companions of the Prophet, ‘Izz al-Din ibn al-Athir discusses this question in detail.  He mentions that after the death of Abd al-Muttalib, who had taken custody of the Prophet (pbuh) after the death of his parents, the custody either had to go to Zubair or Abu Talib.  Ibn al-Athir then mentions several narrations concerning how the matter was settled:

1. that Zubair and Abu Talib drew lots to see who would take custody,

2. that the Prophet (pbuh) chose to stay with Abu Talib, who was gentler than Zubair, and

However, a fourth narration, mentioned by Muhammad al-Zarqani, mentions that custody was shared between the two, but that Abu Talib is mentioned more often than Zubair as the Prophet’s guardian because he outlived Zubair, who “did not live to see the age of Islam” [Sharh al-Mawahib al-Ladunniyah].

Did Zubair Live to See the Prophecy?

Based on al-Zarqani’s quote above, it is therefore the case that Zubair passed away before Muhammad (pbuh) received revelation.  This is supported by other sources, which state that only four of the Prophet’s uncles lived to see the Prophecy: Abu Talib, Abu Lahab, Abbas, and Hamza [Ibn al-Qayyim, Zad al-Ma’ad; al-Salihi, Subul al-Huda wa al-Rashad; al-Tabari, Dhakair al-Uqba].

A second opinion, mentioned by historians al-Baladhuri and al-Wazir al-Maghribi, is that Zubair died during the period of revelation.  However, they deemed this opinion to be weaker; after all, if such an important figure in Meccan tribal politics had witnessed the Prophet (pbuh)’s first calls to Islam, his reactions and positions would have been recorded in the seerah literature.  Rather, we find that narrations describing this time period focus on the Prophet (pbuh)’s other uncles.  This indicates that by the time of the revelation of the Qur’an, Zubair ibn Abd al-Muttalib had already passed away.

In terms of when he specifically died, no exact dates are given.  Muslim historian al-Baladhuri mentions that Zubair died while the Prophet (pbuh) was in his thirties.  We know at the very least that the Prophet was in his twenties during the Hilf al-Fudul, so it is not possible for Zubair to have died before then.  This means he must have passed away sometime between the years 590-610 CE.  And Allah knows best. 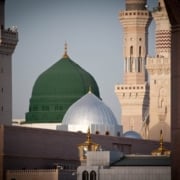 How Can I Attach to the Prophet? [Video Answer] Is the Sealed Nectar a Recommended Book?