Question: I have read numerous views about the rule of breastfeeding which makes a person a mahram.

Some scholars believe that one suckling is enough to make a person mahram and others believe that the suckling or breastfeeding session should be five or more times within the first two years of a childs life to make him a mehram. I would like to know what is the most common understanding on this issue. How many times does one have to be breastfed to become a mahram?

Thank you for your question. The mahram relationship, like the one between siblings or parent and child, is established in the Hanafi school after even a single instance of ingesting even a drop of the milk of a women, as long as the child ingesting it was less than 2.5 lunar years old at the time. [Mukhtasar al-Quduri]

According to the Kuwaiti Fiqh Encyclopedia, the position that one instance of feeding establishes the mahram relationship is the position of the majority of scholars, including many of the Sahaba, Tabi’een, the Hanafi and Maliki schools, as well as a narration from Imam Ahmad ibn Hanbal. [al-Mawsu’a al-Fiqhiyya al-Kuwaitiyya]

Their proof for this is from the Qur’an itself, when Allah Ta’ala says, “And your mothers who breast-fed you…” [Quran 4:23]. This connects the event of breast –feeding to the establishment of the mahram relationship without any specification or qualification of the number of times it took place, thereby meaning that even one instance of suckling would fulfill the meaning and establish its ruling.

The opinion that there should be 5 feedings to establish the mahram relationship is the position of the Shafi’i and Hanbali schools. Their proof was the hadith of Aisha that you referred to, that originally the number of feedings was set at 10 in the Quran, then abrogated to 5 [am: then further abrogated from recitation, with the abrogation of its ruling being the point of difference here].

However, as Mufti Taqi Usmani explains in his commentary on this hadith, it is clear that after considering many other narrations of Sahaba and Tabi’een that mahram relations are established by “little or much” breast-milk, the ruling of 10, 5 or 3 feedings must have been abrogated in stages till only one feeding was required, but since this abrogation took place right before the passing of the Prophet [Allah’s peace and blessings be upon him], perhaps not every Companion was aware of the final ruling right away. Many of the jurists amongst the Companions, however, were. [Usmani, Takmila Fath al Mulhim Sharh Sahih al-Imam Muslim] Is a Father Who Molests His Daughter Still Considered Her Mahram (Unmarriageable Kin)? 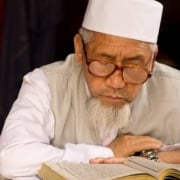 Are My Grandparents' Siblings and My Father-In-Law's Brothers From My Unmarriageable Kin (Mahram)?