I was recently traveling with a friend. At the airport she said that women are not supposed to pray standing so she sat on the chair and prayed. I wasn’t sure if that was true. Also it was an empty part of the airpot and we were sitting with our backs to the wall. I got doubts so decided to sit. Was I right to pray like this?

Standing in the prayer.

The default ruling of the prayer is that one performs the prayer standing. Sitting is only allowed if one is ill, or if standing will worsen an illness, or delay the recovery from it. So in this situation I’m afraid your prayer was not valid. You will have repeat the prayer.

The mechanics of the prayer of ladies is such that the movements do not exaggerate the display of any part of their bodies as they bow and prostrate before the perfection and majesty of Allah Most High. This is why they do not need to bow as low as men, for example. This is a huge blessing from Allah as it saves them from the embarrassment they could experience if they had to pray as men do in a public setting. It is the perfect balance between worshipping Allah out of obedience no matter where one is, and maintaining one’s modesty, which is part of faith and one’s nature.

I recommend that you and your friend study the fiqh of the prayer, and repeat it if you have done so. Many a time details learned in the past, if not reviewed, end up being altered in our minds, which can lead to the above scenario. One’s relationship to Sacred Knowledge should be constant in some form or another, and having a teacher means one can ask about one is confused or curious about. 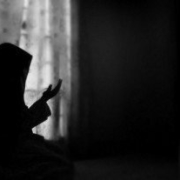 Can a Woman Pray Loudly If She Is Alone?

Is It Obligatory for Women to Wash All Their Hair After Intercourse?

Is It Permissible to Elect a Woman as Head of the MSA?