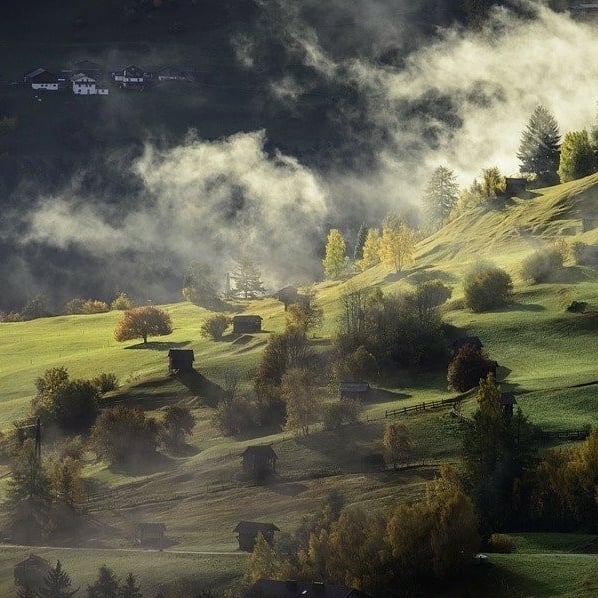 When a grandfather dies, as long his sons are still alive, the grandchildren do not inherit anything from him. Only their father (his son) and their uncles and aunts would inherit. Once their own father then dies, his children (the grandchildren) would only inherit whatever the father had inherited from his father (the grandfather).

To illustrate, let us assume that Qasim Ahmad has three sons and one daughter. One of his sons, Khalid, has two sons and two daughters. Qasim dies leaving $20,000 and a house with a large orchard. His wife is still alive, and he leaves a number of grandchildren and a number of brothers and sisters (the great uncles and aunts of the grandchildren).

The inheritance is divided as follows:

The $20,000 would be divided based on the fractions above, the heirs would either value the house with the large orchard by themselves and come to an agreement, or it would have to be valued by a government official and divided based on its value.

Now Qasim’s son Khalid dies before the money and the house with the large orchard are divided. He himself also had $50,000 and his own house. Khalid dies leaving his mother, his wife, his two sons, two daughters, his two brothers, and his sister.

Now we add what Khalid would have inherited from his father Qasim to the wealth he dies owning. This will be divided by his own heirs. So, the quarter of Qasim’s inheritance (the 1/4 of $20,000, and 1/4 of Qasim’s house with the large orchard) plus Khalid’s $50,000 and his house are divided in the following way.

This is just an example. The actual fractions will vary based on the actual numbers of living relatives.

So in summary: the grandchildren still inherit from their grandfather, but only the portion of the grandfather’s wealth that the father originally would have inherited.

Please refer to a local mufti for the calculations of your actual case.

Should I Cut My Family Off To Please My Husband?

Answered by Shaykh Irshaad Sedick Question  Am I sinful if I don’t call m...
2 mins

Can I Write My Will So That My Estate Passes First to My Wife and Then to My Children When She Dies?

Answered by Mawlana Ilyas Patel Question Can I give my wife 100% of my estate if...
3 mins

Is It Necessary to Change My Name after Accepting Islam?

Answered by Shaykh Yusuf Weltch Question I am a new revert, and I took my Shahad...