I am a shafii, recently it has come to my realization that the hair dresser I have been going to for years owns a dog and sometimes brings the dog into the shop. I have not seen her touching the dog with wet hands. I am worried that my hair has been contaminated with filth. I am worried my prayer for many years may not count.

The default rule or maxim in relations to possible contamination with najasah, is purity until definite contamination is established. The maxim reads, “certainty will not be removed through doubt”.

Since it’s established that whenever you entered the hairdresser you were in a state of purity, with certainty, and that there is doubt whether your hair was contaminated or not, the above rule and maxim means that your would have maintained a state of purity. Consequently, there is not need to worry about further contamination at your home. Also, while the Maliki position may be a viable alternative, there is no need to depart from your madhhab in this instance. 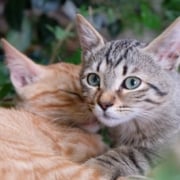 Should I Buy Halal Food for My Cats? [Shafi'i]

Can I Live With Roomates Who Are Owning Dogs?

Is It Permitted to Sell Cats and Dogs?