Is it permissible to attend public schools or universities in the west where boys and girls are co-educated? Would it be obligatory to choose a school which is segregated if one has the choice?

Mixed schools, and indeed offices, shopping centres and the like, where men and women, and boys and girls interact without segregation are not in and of themselves forbidden. What is forbidden is being alone with a member of the opposite sex. ‘Let no man ever be alone with another woman except with a male relative of hers.’ [Bukhari and Muslim]

That said, when young men and women are put together in classrooms and lectures halls, the nature tendency is to cross the bounds of modesty and decorum, and to gaze, chat, joke, flirt and ultimately date. The boy-girl interplay is, for some, the very point of the high school and university experience. When this becomes more than highly probable, it becomes forbidden.

Many moons ago, in a far more conservative and religious environment than any high school today, a poet once said:

A gaze, then a smile, then a greeting,
Words, then a tryst, then a meeting. [Ahmad Shawqi]

For this reason, it is highly disliked in the Sacred Law, especially when dealing with younger adults, to have mixed classes and lectures, or even mixed schools or universities. This would be particularly so if a certain individual had a past history of dating and the like. Someone in that scenario may well think about delaying university or choosing another country that may provide a more segregated environment.

If you can find a good school that is segregated, or study online, and still expect the get the knowledge and credentials you need to work in life, then it would be far the better option. If not, then you just have to exercise extreme caution, lower your gaze, and bite the bullet: ‘Indeed Allah is with those who are resolute in their fear [of Allah], and those who are excelers in good.’ [16: 128]

I know someone who had plans to go to med school and then later, in view of the very question you are asking, thought better of it: he decided instead to go and study the Sacred Law in the middle east, in an environment far more conducive to a righteous and god-fearing life. He asked a scholar, and he received a surprising response: ‘Don’t be a donkey in the mosque.’ That is to say, it was better for him to go out there and be a religious person in the West than for him to be a ‘scholar’ who just sits there in the mosque being of little benefit. Every individual has different needs, responsibilities and potentials, and this should come into the process of proper decision making.

In general, we have to live in this life of light and darkness, good and bad, and its myriad of uncertainties, and we have to join between the precaution dictated by Allah’s saying, ‘Fear Allah as He should really be feared.’ [3:120], and the dispensation of doing only what one can actually do, as brought out by His saying, ‘Fear Allah as much as you are able.’ [64:16]. 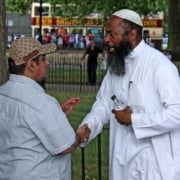 How Do I Give Da'wah to (Call to Islam) the Opposite Gender?

A Detailed Exposition of the Fiqh of Covering One's Nakedness (awra)