For the past several years I’ve struggled a great deal with waswasa and general worrying/paranoia regarding issues surrounding my practice and understanding of fiqhy matters. There are two key matters that worry me a great deal (1)  issues regarding faith and belief and (2) marriage.

In terms of concerns regarding marriage, I read an answer years ago that has troubled me since. It is in regards to marriageable relations being forbidden by touch. For years, I’ve worried about touching family members and how that might affect my marriage.  I realized over time that it must be waswasa.  I have worried about nursing and about feeling desire, not directed at my child, but in general if I see something or feel desire towards my husband while nursing and whether that would have an effect on my marriage. I’ve worried about falling asleep while nursing and having dreams of a sexual nature and whether that would again effect my marriage.

I just want this constant worrying to end.

I would appreciate it if you could please address the concerns above as soon as you can and give me advice as to what I could be doing to avoid waswasa.

A Brief Response to Your Concerns

1) Regarding accidental statements/gestures of disbelief (kufr), a basic principle to keep in mind is the statement of Imam Tahawi in his creed, “A servant is not considered to have left his faith except by denying that which originally caused him to enter into it,” i.e., except by denying one’s very belief in Allah’s oneness or the resulting faith in all that is necessarily known of the religion.

In addition, some scholars clarify that when disbelief is mentioned in some rulings, it is not to be understood literally, but rather as an exaggeration to divert believers from falling into the act being described.  [Maydani, Sharh Aqida Tahawiyya]

So one is not considered a disbeliever unless:

(a) one believes in something that entails disbelief, such as if one believes that Jesus (upon whom be peace) is the son of God; or

(b) one mocks or reviles Allah, a prophet, the religion or its sacred symbols, like throwing the Qur’an in the trash; or venerates the symbols of other religions, like prostrating to an idol or cross; or

(c) one denies something necessarily known of the religion, such as denying the obligation to pray salat, for example.

2) Regarding touching your child with desire, scholars mention that the condition for the ruling of prohibition to take effect is that the one being touched is an adolescent or adult, not a baby. For a girl, this is 9 years old. For a boy, 12 years old. Below those ages, touch with desire would not result in any prohibition. [Ibn Abidin, Radd al-Muhtar]

Also, for a woman, “desire” is defined as a very strong inclination of the heart such that it clouds one’s thoughts, not merely an inclination. [Ala al-Din Abidin, Hadiyya `Ala’iyya]

Lastly, if the conditions of prohibition were fulfilled yet it was a genuine error, it may be wise to seek a fatwa from a reliable scholar of another school, such as a Shafi`i.

The Devil is a trickster. Deceit is his profession, and he has been in business for as long as humans have existed. He knows our psychological makeup very, very well. He is cunning and crafty, and he works very hard to achieve his goals. He has many tactics, at the top of the list being baseless misgivings (waswasa) and creating doubts in our minds and hearts. He wants us to become confused, obsessed, and compulsive to the extent that it destroys us.

The tactic of baseless misgivings [waswasa] is so important for us to be aware of, that Allah Most High placed the Surah dealing with it at the very end of His book, sealing the Qur’an with timeless counsel for the human being. Yet the very name of that Surah – al-Nas (humanity) – reflects Allah’s limitless generosity and care for His creation. He reminds us that He is Rabb al-Nas, Malik al-Nas, Ilah al-Nas (The Caretaker of humanity, the King of humanity, the Lord of humanity). He is Caretaker, King, and Lord of all of creation, yet he singles humanity out to honor us and to show His immense love and concern for us.

And what is the context of His mentioning these Divine attributes? Our seeking His protection: “Say: I seek refuge in…”

This, then, is the key to combating the Devil – turning to Allah in a state of weakness, expressing our utter need for His help and protection against this cunning enemy. The remembrance of Allah (dhikr) is a stalwart asylum that blocks out the Devil’s whisperings, which are in reality of no power or consequence. As Ibn Ata’illah states, “If the Devil is not heedless of you, then do not you be heedless of the One in Whose Hand is your forelock.” Allah is in full control. Allah created the Devil to spur us forward in our journey to Him Most High.

Learn sacred knowledge so you know the reality of the Sacred Law and its limits, and then turn to Allah with hope, confidence, gratitude, love, contentment, and trust in Him. Express your need of Allah’s help, and then let Him take care of it. Relax and give no weight whatsoever to the Devil’s whisperings. The most frustrating thing for him is that we ignore his insinuations, and focus on Allah and His remembrance. The Devil hates when we are full of hope and reliance in Allah. He hates when we are grateful and sincere. He hates when we give no weight to him, but rather turn to Allah with love.

Our Beloved Messenger (Allah bless him and give him peace) said:

Verily the religion is ease, and no one shall make the religion hard except that it will destroy him. So be balanced, do your best, and rejoice! And seek help in the morning, the early evening, and something of the night.” [Sahih Bukhari]

Relax, and as our Prophet taught, rejoice. Be happy and content with Allah. Allah is not trying to trick you out of your marriage, nor is He trying to take you out of your faith. Allah loves that you have a happy, successful marriage, and Allah loves that you draw closer to Him. Enjoy your family, and show gratitude for your child. Learn your religion, as knowledge will empower you against the Devil. Then, trust in Allah.

Also, please see the following answers with more advice on dealing with waswasa: 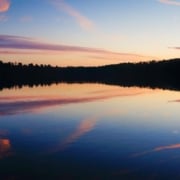 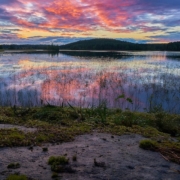 Plagued by Thoughts of Faith in Allah

I Feel Certain That I Repeatedly Break My Wudu, Even During Prayer; What Should I Do?