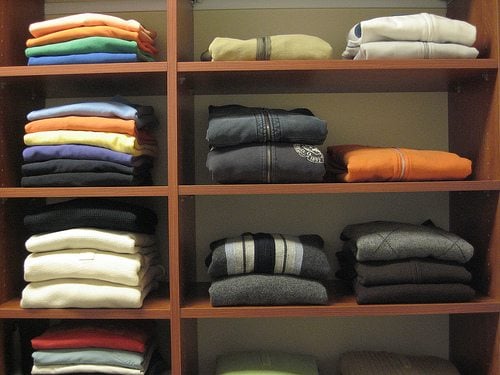 Question: Is it preferred for men to wear loose slacks, or to cover using a longer shirt outside of prayer? What about tight jeans? If one fears that some of his awra may have been exposed during the prayer due to his trousers being pushed back, is his prayer valid?

It is better for a man to wear loose slacks and something (whether a longer shirt, a coat or a jacket) that covers his rear.

Somewhat tight jeans would be at least somewhat disliked and blameworthy. Form-fitting jeans that fully define the shape and form of a part of the body that must be covered with clothing (awra) during normal wear would be sinful to wear and prohibitively disliked.

There are two main issues here:

If you mean that his trousers get lowered such that some of his lower back or upper rear is exposed, then if the exposed area is a quarter of the exposed limb, in his estimation, then the prayer would be invalidated if unintentionally exposed for more than the extent of 3 tasbihs (saying “subhan Allah”).

If you mean that because his trousers are tight, then if they completely define the form and shape of a limb that is considered nakedness (awra, which is between navel and knee for men, and the entire body except face, hands and feet for women), then this is prohibitively disliked (makruh tahriman) and sinful, both inside and outside the prayer. A prayer performed with such clothing would be necessary (wajib) to repeat.

If, however, the trousers are tight, but not such that they completely define the form and shape of any limb that is considered nakedness, then it would be somewhat disliked (makruh tanzihan) and offensive, but not quite sinful. One should do one’s best, however, to wear loose clothing and to pray with an upper garment (such as a jacket, or even a tucked-out shirt) that hangs below one’s rear.

Repeating such a prayer within the time is unquestionable.

For past performances, the scholars have judged that it is no longer necessary (wajib) to repeat the prayer; repentance is enough. [Bahr al-Ra’iq, Durr, Tahtawi]

However, the more cautious opinion, which should be applied to current performances, and questionable past prayers if they are limited in number, is that it remains necessary (wajib) to repeat the prayer during and after the time, along with repentance. [Ibn Abidin adopted this view]

Repentance is necessary in all cases, even if the mistakes occurred out of ignorance. It is an agreed upon legal maxim that, “Ignorance is not a valid excuse.” We have been made morally responsible to follow and implement the rulings of the Sacred Law; it is our duty to learn them. The Prophet (Allah bless him and give him peace) said, “Seeking sacred knowledge is an obligation of every believer.” Seeking knowledge of the obligatory and necessary is itself obligatory and necessary.

In the Case of Women:

This is in the case of men. For women, issues of nakedness (awra) are even more sensitive, for reasons that are clear. Even slight definitions of bodily curvatures are serious, so in their case it is even more imperative that their clothing be wide and loose.

I learned from a respected elder, who is a dear friend, that some foreigners have purchased a lot of the garment industry in Jordan. One unfortunate result of this, or maybe it is a sign of the times, is that women’s jilbabs are now very often tight in all the wrong places. The point is not to wear something called a jilbab; rather, that it be wide, loose, and modest.

May Allah give us all the success to gain useful knowledge and act upon it, in the footsteps of His Beloved Messenger (upon him be the best of blessings and most perfect of peace).