TAGGED WITH:: 'ids, festival, marriage, Marriage between the two Eids 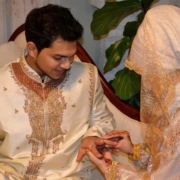 Dealing With Cultural Constraints on Marriage

Are There Any Legal Leeways to Get Over the Refusal of a Guardian Regarding an Interracial Marriage?

How Can I Reconnect to My Husband Who Is Addicted to His Phone?

How to Approach Getting Married