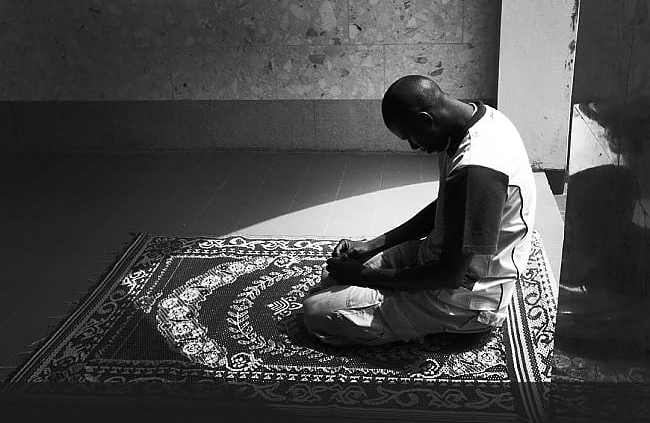 Question: Assalamu ‘aleikum. I have a few Maliki fiqh questions.

1. I currently live in one city and study in another city that is 163 km away from my city of residence. I travel there by train and it takes approximately 1 hour and 10 minutes. Can I consider myself a traveler while being in the city where I study and may I join prayers if there is a practical need to do so?

2. Is it obligatory or recommended for the traveler to shorten the prayers?

3.  Is it generally permissible to follow the opinion of another madhab when there are real difficulties involved in not doing so?

4. Every madhab has some book which is considered a reference work, a book to turn to for reference when it comes to detailed or complicated issues. For the Shafi’is I think Imam al-Nawawis al-Majmu’ would be considered one such work, and for the Hanbalis al-Mughni of Ibn Qudama. Would Al-Kharshis explanation of Mukhtasar Khalil be considered such a work in the Maliki madhab, which has been printed with a hashiya of shaykh al-‘Adawi, or is al-Sharh al-kabir with the hashiya of al-Dasuqi a stronger reference?

1. The distance that you mentioned is sufficient to be considered a traveller and shorten your prayers. For the Maliki ruling on joining prayers, it would only be while you are en route during your journey. In the situation where you described about studying, you could pray maghrib and isha when you return to your home. While you are on campus, since you are a traveller, you can also join dhuhr and asr. It would be preferred for you to dealy Dhuhr to pray with Asr.

2. The shortening of prayers is a strong sunna according to the Maliki school.

3. Following the opinion of another school of the four schools of thought is valid and permissible, as long as one does the whole act of worship (or interaction) according to that opinion. If for example, one will follow a Shafi’i opinion on wudu, they should also make their prayer valid according to the Shafi’i school. To join between multiple opinions is called talfeeq and is not permissible.

When choosing to follow the opinion of another school there must be a need. This is called a dispensation (rukhsa) and is permissible. What is not permissible is constant following of dispensations (it-tiba’ al rukhas). This has been mentioned by the scholars such as Imam Nawawi in the Maqasid.

4. The two commentaries on the Mukhtasar that you mentioned are relied upon works and may be referenced when needed. In general, the Mukhtasar and its commentaries are difficult to navigate unless one has studied them with a teacher.

I would also suggest that you begin reading and referring to a more basic work, such as Ibn Ashir or Risala. Both have translations in English available on the internet.

How Was the Prohibition on Touching the Quran (Even Translation) without Wudu Derived?

Answered by Mawlana Ilyas Patel Question Based on this answer it says (regarding...
2 mins

What Is the Majority Opinion on Congregational Prayer?

Can You Throw Some Light on Raising the Finger during Tashahhud?

Answered by Shaykh Farid Dingle Question Given that there are different and conf...
3 mins

Answered by Shaykh Irshaad Sedick Question Is it permissible to do Istighatha/I...