One month into our marriage during an argument, my husband said “I divorce you” in anger and without intent. He even forgot he said it almost right after. He did not verbally take me back but we lived together for a few months. Five months later, in another argument, he texted me to say “My decision to divorce you is final” and the next day said “I divorce you” three times. Are we divorced once or irreversibly?

Accordingly, the first divorce of your husband will be valid, whether he was angry or not, intended it or not. Thereafter, you have confirmed that he did not formally take you back as a wife. If this is the case, and your iddah or waiting period ended – which is the completion of three clean periods – you are no longer considered his wife. If he divorces you thereafter, those divorces are not considered valid. If you wish to continue a relationship with him, you would have to perform a new Nikah or marriage.

I Want a Divorce, but My Family Has Disowned Me Because of That. What Do I Do?

Is It Possible to Cancel a Conditional Divorce? 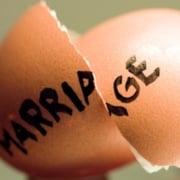 How Can a Woman Stipulate in Her Marriage Contract Her Right to Initiate Divorce?

Shaykh Faraz Rabbani - "The Position of Islam on Divorce, Adoption and Abortion" - YouTube