I have a question about the verse number 46 from Surah al Ahzab.

Why does Allah use the word “siraj” or “wasirajan muniran” in that ayat. Isn’t “siraj” only meant for the sun which gives off light? Doesn’t “munir” mean reflected light ?

Answer: Wa’alaykum assalam. Jazakum Allah for your question. I pray that this finds you in the best of states.

The verses you mention are, ‘O Prophet, indeed We have sent you as a witness and a bringer of good tidings and a warner, and one who invites to Allah, by His permission, and an illuminating lamp. [33:45-46]

It is clear from the verse, and as stated in the books of the tafsir, that the object being described as an illuminating lamp (sirajan muniran) is the blessed Prophet ﷺ. [Tafsir al Sawi]

Concept of Light in the Qur’an

The concept of light is abounding in the Qur’an, and indeed both the Quran and the Holy Prophet ﷺ are described as light, ‘O mankind, there has come to you a conclusive proof from your Lord, and We have sent down to you a clear light’. [4:174]. In many places in the Qur’an the word nur is used to describe the Prophet, as well as the word Allah Most High uses to describe Himself.

Other words are used in the Qur’an to refer to light or associated meanings, such siraj, munir, diyaa’, nur, all having different meanings or shades of meanings. While Allah Most High uses siraj and dyaa’ for the sun and uses munir and nur for the moon, the two words are not restricted as exclusive adjectives for the sun and the moon.

A correct translation for the word munir is, ‘Illuminating’, ‘Shining’, Luminous’ or ‘Light-giving’, The translation of ‘reflected light’ is not found in any of the main Qur’an translations or well-known Arabic Dictionaries [Pickthall, Arberry, Yusuf Ali, Taj al Arus, al Wasit]

The Prophet ﷺ as an Illuminating Lamp

In the above verse in question, the Prophet ﷺ is described with the words, siraj and munir combined. Siraj carries the meaning of a light of a lamp, which as we mentioned is the word used to describe the sun elsewhere in the Quran. The light of the sun diffuses everywhere and in the physical world, all other lights pale compared to it. Such was the Messenger of Allah ﷺ and the Message he brought.

Munir, as we mentioned, conveys the meaning of light-giving, luminous and illuminating. Both the Message and the Messenger ﷺ were a light for mankind, illuminating not only the hearts and souls of those present, but who’s light still reaches us today and through which we are guided.

In summary then, the words siraj and munir have different shades of meanings and are not exclusive to the sun or the moon. Rather, they can be applied literally or metaphorically to any object, person, though they are only completely realised in the essence, person, and appearance of the Holy Prophet ﷺ and the Message he came with. 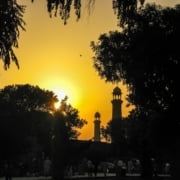 Hadiths On The Cosmos On Cosmic Revolution, Time, The Dying Sun And Energy

The Light of the Prophet

How Should I Pray in a Country Where the Sun Doesn't Set?