JazakAllah khayran for reaching out with your question. Sometimes when people try to deal with matters like this on their own, after repeated failures they fall pray to the deceptions of the Devils who succeeds in making them feel more distant from Allah’s infinite kindness.

The Messenger of Allah (Allah bless him and grant him peace) very kindly relived us of the burden of dysfunctional guilt when we are unable to escape a cycle of disobedience: he said, ‘[I swear] by the One in whose hand my life is; if you never sinned Allah would get rid of you and then create another people who would repeatedly sin, and then repeatedly ask for forgiveness, and He would then forgive them (Muslim). This hadith clearly shows us that it is beyond our capability to completely avoid all sins – unless Allah, out of His infinite kindness, protects a person from doing so due to His love for him. We have been made weak with regards to certain matters so that we can turn to Allah expressing our weakness, our need for Him, our utter dependence on His kindness, mercy and care. In short, He wants us to express our slave-hood to Him.

Look at our blessed father, the prophet Adam (Allah bless him and grant him peace): Allah knew he would slip up in Paradise, yet He still accepted his apology when he repented. Why? Because Adam accepted his own weakness and could see that he slipped, and that if it was not for the kindness of Allah he would never succeed. Compare this with the response of Iblis: He was too arrogant to see any fault of his own, and even dared to assign the blame of his crime to Allah.

Allah wants the best for us, which is why He has left the doors of repentance open for us until just before the Day of Judgement. This world is a manifestation of Allah’s names, and three of Allah’s names show tis very clearly: al-Wadud, al-Ghafur, and al-Ghaffar.

Al-Wadud is derived from the word wudd, which means to love someone coupled with an eagerness to ensure no harm comes to them. Al-Wadud is an intensive form of this which shows that Allah loves His creation, and He wants to protect them from matters detrimental to them. This is why the Divine Books were revealed and why the Messengers (Allah bless them all and grant them peace) were sent.

Al-Ghafur comes from a root which originally means ‘to protect’, so His forgiveness protects one from the consequences of one’s sin. The actual wording, however, shows that Allah forgives anything and everything no matter how great. The Messenger of Allah (Allah bless him and grant him peace) once quoted Allah saying, ‘O son of Adam, even if your sins reached the very clouds of the sky and you asked for my forgiveness, I would forgive you, and I care not!’ (Tirmidhi).

Sometimes a sin may place you in a state which is better than a state which apparent obedience would leave you in: the great Egyptian spiritual master Ahmad b. Ata’illah al-Sakandari said, ‘How many an act of disobedience which leaves you humbled and broken-hearted before Allah is better [for you] than an act of obedience that makes you feel invincible and puffs you up with arrogance!’ He also warned us saying. ‘Let not your sins become so great in your eyes that they end of preventing you from having a high opinion of Allah Most High; he who knows His Loving Lord deems his own sin insignificant when compared to His generosity.’

Having said this, a sin is not something trivial, and all believers hope that Allah will one day make them such that their sins are few and far between .One should work to this goal, and never have an attitude which suggests that sinning is okay. One should ask Allah for a way out from a sin they repeatedly fall into, and take the means to get there. This may mean changing one’s social circle, habits and preferences, and Allah is too kind to ignore a servant who calls on Him wanting to be a better servant. The response always comes, even if it’s after a while.

You could start by avoiding talking to members of the opposite gender and other unnecessary interactions which lead you to sin, and consider marriage if it’s possible for you and fasting in the interim.

May Allah grant us and all the Muslims a high opinion of Him and the ability to shed all sins and faults. Amin. 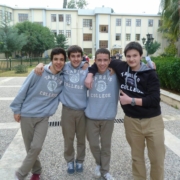 What Is the Meaning of Khalwa (Seclusion) with the opposite Gender?

Can I Chat With the Opposite Sex Online About Decent and Moral Subjects?

Can a Muslim Boy Meet a Non-Muslim Girl in a Public Place, Unchaperoned, to Discuss Her Interest…