Question: One of my relative is about to marry his father’s own brother’s daughter.  Isn’t he a mahram to her? Aren’t they like brother and sister. Is it allowed in Islam?

The scenario you mention seems to indicate that he is marrying his cousin. There is absolutely nothing wrong with that.

Examples from the Sunna

The upshot is that they are not considered like brother and sister. Far from it, rather, they are considered to be two unrelated people. He is not of the unmarriageable kin (mahram) for her; hence they would observe proper etiquette accordingly.

[2] The Ruling of First Cousin Marriages: A Balanced Perspective 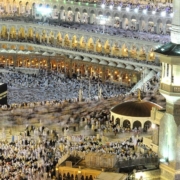 Women’s Attire in Private and Around Unmarriageable Relatives

Adoption and Creating a Mahram Relationship Through Nursing