Answer: In the Name of Allah, the Merciful and Compassionate

Friday prayers are valid if one catches any part of the imam’s prayer before the closing salam. [Shurunbulali, Maraqi al-Falah]

However, it is an incumbent duty for resident, able Muslim men to attend the Friday sermon (khutba) from the beginning—and it is also incumbent to leave worldly engagements such that one is able to catch the sermon in full.

Allah Most High commands, “Believers! When the call to prayer is given on Friday, then hasten to the remembrance of Allah, and leave your transactions…” [Qur’an, 62.9] The scholars concur that it is the Friday sermon (khutba) that is meant by “dhikri’l Llah” (remembrance of Allah) in this verse, as confirmed by many hadiths of the Messenger of Allah (peace & blessings be upon him).

If one is late for the Friday sermon, one should seek Allah’s forgiveness, and repent sincerely—through (1) remorse; (2) leaving this mistake; and (3) resolving never to repeat, to the best of one’s ability.

Reader on Repentance (tawba): A Reader on Tawba (Repentance)

Which Direction Should I Face During the Sermon of the Friday Prayer?

Can I Miss the Friday Prayer Because My Wife Is Giving Birth? 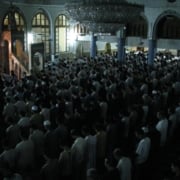 Is Friday Prayer Valid in a Rented Space in the Maliki School?

The Rulings Related to Friday Prayer

The Language of the Friday Sermon (Khutba) in the Maliki School

The Obligatory & Sunna Prayers for Friday