Question: If one lives near to the mosque, such that one can walk to it in a matter of minutes, should one pray sunnah prayers at home? If one prays one of the pre-fard sunnahs (Fajr/Dhuhr/Asr/Isha) at home, how early can one pray it, in relation to the time of the congregation for the fard (praying the sunnah as soon as the time for prayer enters could leave a half hour gap or more before fard, depending on which prayer it is)? Does one still pray tahiyyat al-masjid if one has prayed a pre-fard sunnah at home? What about post-fard sunnahs?

The Prophet (may Allah bless him and grant him peace) said, “See to it that your prayers are in your houses, for verily the best of a man’s prayers is in his house, except for the prescribed prayer.” [al-Bukhari and Muslim]

The Preferred Place for Sunnas

The most meritorious location, generally speaking, for sunna and nawafil prayers is the house. This would apply to both pre-fard sunnas and post-fard sunnas.

For the post-fard sunna, if one fears that by returning home they will be distracted or busied from preforming the prayer, then it is better to perform it in the masjid.

The wisdom in praying in the house is that one is further away from the possibility of showing-off and one is able to have more sincerity and humility. Some scholars mentioned that the most meritorious place is the one in which the person is able to have the most sincerity and humility. There are some exceptions for the general recommendation of praying sunnas at home, such as the tarawih prayer. [Ibn Abidin, Radd al-Muhtar]

It should be stressed that one should do whatever is needed to make sure they are not unnecessarily leaving the sunna mu’akkada (confirmed sunna) prayers. If one finds that despite resolving to pray at home, they don’t usually get around to it because of distractions, then they should pray at the masjid. If praying at the masjid facilitates the performance of the sunna ma’akkada, then it is better.

Another consideration mentioned traditionally by some ulema and honored by many scholars of our time is the influence that one’s actions has on other masjid-goers. If one’s example of leaving immediately after the fard prayer could put off others from praying the confirmed sunnas, then it would be preferred to pray the sunnas in the masjid. This is an important consideration in our times. [Mulla `Ali al-Qari, Mirqat al-Mafatih]

The Preferred Time for Sunnas

It is preferable that there not be a gap between the sunnas and the fard prayer. A delay in which one is busied with non-prayer actions without excuse would diminish in the reward of the sunna. Therefore, one would pray the pre-fard sunnas before one leaves for the masjid, and not at the beginning of the prayer time, assuming there is a large gap between the two. Some scholars preferred that one prays the sunna of Fajr at the beginning of the prayer time. [Ibn Abidin, Radd al-Muhtar]

The Prayer of Greeting the Masjid

The prayer of tahhiyat al-masjid  (greeting of the masjid) is a confirmed sunna once a day, and recommended thereafter. It is best to be preformed before sitting, but the sunna is not lifted if one does sit first. One can intend this prayer along with their sunna or fard if they do not have time to pray it. One should not pray the tahhiyat al-masjid during a disliked time. [Ibn Abidin, Radd al-Muhtar; Ibn Nujaym, Al-Bahr al-Ra’iq] 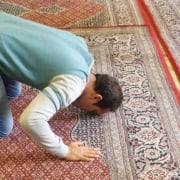 The Prayer of Greeting the Mosque (tahiyyat al-masjid)

How Do I Pray A Four Rak`at Sunna Prayer?

Are We Sinful for Missing Sunnah Prayers, or Are They Just for Extra Reward?

Should I Make up Missed Prayers or Pray Sunnah Prayers? (Video)