Shaykh Farid Dingle is asked about the permissibility of speaking in a place that is built for relieving oneself such as a bathroom.

What is the ruling in the Shafi‘i school about speaking beside the sink in a bathroom if one is far from the toilet?

In the Name of Allah, the Most Merciful, Most Compassionate.

Speaking in a place built for relieving oneself is permissible does not any name of Allah or any other noble name, and one is not in the process of relieving oneself. This is the position of Ibn Hajar al Haytami. According to a number of other late Shafi‘i scholars, it would still be offensive. (Al-Hawashi al-Madaniyya)

That said, given that the discussions of the Shafi’i on this topic revolve around ‘a place build for relieving oneself’ or ‘a filthy place’, are modern bathrooms, that are built both for relieving oneself and for washing, especially large ones that are kept clean—are they really the same as what our scholars were talking about?

The default is that they are. However, what we have seen and heard from some modern Shafi‘i scholars is that by being at a distance from the toilet itself, or by the toilet seat being down, they no longer consider a person to be in a place built for relieving oneself or “a filthy place,” and hence they do not find any problem in speaking or even saying Allah’s name or the like in such places.

So in answer to the question, the default is that either permissible or offensive, as mentioned above, to talk next to a sink in a bathroom with a toilet. However, it may well be simply permissible given the nature of certain modern bathrooms.

Is Performing Wudu in the Bathroom Disliked? [Shafi’i]

How Should I Achieve Ritual Purity When Going to the Bathroom Is Dangerous? [Shafi’i]

Is It Permissible to Enter a Public Bathroom Whilst Carrying Islamic Material in a Closed Bag? 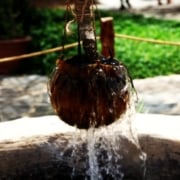 How Many Liters of Water Is Considered Sunna to Use for the Ritual Bath? 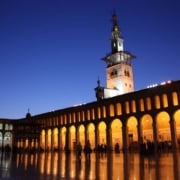 Why Islam Is True E10: God Is a Volitional Agent