Answered by Shaykh Faraz Rabbani
Question: Assalaamu alaikum wa rahmatullahi wa barakatuh,
Is it permissible to use amulets (i.e. hang) to deflect evil eye?
Answer:Assalamu alaikum,
It is permitted to use ta`wizes (amulets) as a means to protect oneself, while knowing that Allah is the only one who protects or benefits.
In the Musannaf of Imam Abu Bakr ibn Abi Shayba, the permissibility of hanging a ta`wiz is reported from many of the Companions and early Muslims (Salaf), including:
Sa`id ibn al-Musayyib, `Ata’, Mujahid, Abd Allah ibn `Amr, Ibn Sirin, `Abayd Allah ibn Abd Allah ibn `Umar, and others (Allah be well pleased with them all). [Musannaf, 5.439]
As for that which is reported from some, including Ibn Mas`ud (Allah be pleased with him), that hanging ta`wizes is shikr, this is understood to mean those that resemble the one’s used in Jahiliyya, or if used thinking that it is the ta`wiz itself that cures or protects, not Allah, or if it contains impermissible invocations or one’s whose meaning is not known, as explained by Allama Abu Sa`id al-Khadimi in his al-Bariqa al-Mahmudiyya Sharh al-Tariqa al-Muhammadiyya. [4.171-172]
In the Fatawa al-Hindiyya, one of the primary references in the Hanafi school, it says:
“There is nothing wrong with hanging ta`wizes, but one should take them off before going to the toilet and before intercourse.” [5.356]
In the Mawsu`a Fiqhiyya(Awqaf, Kuwait), it states that, the linguistic meaning of ta`wiz is derived from seeking protection or refuge. The type that is prohibited is the like the one’s used in pre-Islamic times, is a major sin and can even lead to disbelief. The type that is permitted according to the vast majority (jumhur) of the scholars is that which is made from the Words of Allah (Qur’an) or His Names, with the condition that the person not think that it has any effect by itself; rather, it protects or heals by the Will and Power of Allah.
And Allah knows best.
Wassalam,
Faraz Rabbani 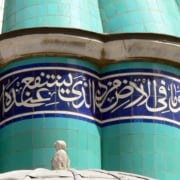 How to Counteract the Effects of Black Magic 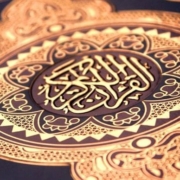 ANSWERS: How do I protect myself from spiritual harm and evil forces?

Can a Child Wear a Necklace With the Verse of the Throne on It?
Scroll to top