Answered by Shaykh Sohail Hanif
Question: Please excuse me for my ignorance but I was under the impression that sajda is only forbidden at sunrise, sunset and zawwal. You wrote to me that sajda is impermissible after asr… what about sajda tilawah which is wajib and the sajda which takes place during qadha prayers after asr? You told me some months ago that it is permissible to read ones qadha prayers between asr and maghrib as they are wajib and not nafl. Please help.
Answer: In the Name of Allah, Most Gracious, Most Merciful
Assalamu alaykum
There are three times in the day when one is forbidden to offer any prayers, even make up prayers which are actually considered invalid if offered at these times. These times are when the sun rises up until it is above the horizon by the length of a spear (about twenty minutes after sun rise), when the sun is at its zenith and when the sun turns dull in radiance such that one can look at it until it sets (about twenty minutes to half an hour before sun set).
A prostration for Qur’anic recital (sajda al-tilawah) for a verse of prostration that is recited within these three times is permissible to be offered in these three times though it is somewhat disliked (makruh tanzihan).
One is also forbidden from offering supererogatory prayers in the time after praying the morning prayer until sunrise and after praying the afternoon prayer until sunset. One is permitted, however, in these times, to offer any number of make up prayers that one wishes and to offer prostrations for Qur’anic recital. (Ala al-Din Abidin, Al-Hadiyya al-‘Ala’iyya, 55, ed. Muhammad Sa’id al-Burhani)
Sohail Hanif
Checked & Approved by Faraz Rabbani

When Is the Last Time One Can Pray the 'Asr Prayer? 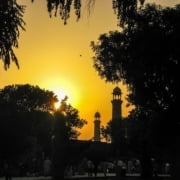 Can We Perform Make-Up Prayers After 'Asr?

Estimating the Number of Makeup Prayers